At Last – A Beginning

How is it now you are home?

The most common question I am asked – “how is it now you are home” or similarly “how is it being a mother after waiting so long?”

People tend to get a slightly blank stare to the question as the true answer is – “I’m not really sure”.

Sounds bizarre doesn’t it?  But really, I’m not sure.  Life is a constant round of doing things that I didn’t do before (particularly washing and cleaning).  Sitting down tends to result in a small mobile creature tugging on my trouser leg wanting to be picked up so I find it best to keep him (and me) busy as much as possible.  I change my clothes more regularly than I did and the days of wearing the same thing more than one day running is a laughable memory.  I get up at 6am when once I would have been going to bed then.  I wash poo off my hands with monotonous regularity.  I have started worrying about the environment and what legacy we are leaving for our children.  I applied for child benefit.  I worry if Daniel will fit in in Kew, will he be happy, will he get married and have a family himself one day, will I be there to see it?

All in all, I suppose the answer should really be – “It’s life (Jim), but not as I knew it”

It’s so hard to remember what I did with my time before and life is so different that it’s just impossible to make any meaningful comparison.  I’m even struggling to remember the traumas of my stay in Kaz.  I find myself looking back fondly and thinking “it wasn’t SOOO bad” (Adrienne said I would, but if she is ungracious enough to say I told you so I shall poke her in the eye with a sharpened umbrella).

Daniel and I have started to get to know each other since we got home and his personality is quickly developing away from the slightly docile child (with a hint of temper) who I knew before, to a far more assertive one who is (literally) finding his feet.  He has progressed from not sitting up when I met him at 11 months to being on the verge of walking four months later.  He is progressing so fast I can’t keep up with him.

Long may the mad shambles that has become my life continue! 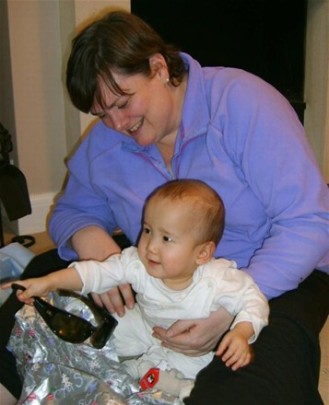 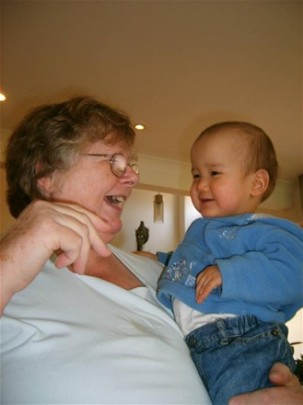 Some Thoughts from A Broad

I did wonder whether I should thank the carers but as they’re unlikely to read this it seemed a little fake.  But I think of them a lot – particularly Luda who was so lovely to me, pretty Lena, Larissa (one of the bacon fat women) who loved Daniel and made a particular point of coming to find him and saying goodbye the day he left and Sveta.  Sveta was with him when I met him and cuddled him until he stopped crying and stayed with us until he was able to be in the same room as me without screaming (which took a while I have to say!).  I thought of her this evening as he woke up crying quite badly, a nightmare perhaps?  He will normally go back to sleep with a little pat on the back but for some reason tonight I picked him up and rocked him back to sleep.  Just because I could and because he is lovely and because he deserves it.

I also think of his birth mother from time to time though surprisingly not as often as I thought I would.  I wonder if she even knows he survived – a scrap of humanity born at 27 weeks weighing less than a bag of sugar.  Whatever got her to the point of leaving the hospital without him, I will never know but I am grateful that she made the decision she did – to carry him and to give birth in a hospital which undoubtedly saved his life.

But most often of allI think about the children.  The ones I got to know – little Alyosha who had his first birthday alone in the sick bay, the two little girls left by their crying grandfather, the little boy in Daniels new group who was heartbreakingly like my nephew Matthew at the same age.  But also I will carry the picture of the three and four year olds wrapped up like Michelin men in their snowsuits being taken out for their daily constitutional around the baby-house building waving at us in the bus and of the children passing you on the stairs saying hopefully “mama mama?”.

Many in the adoption community believe that it is fate/divine providence that you are matched with the child that is intended for you.  I never did agree.  It is tempting to look now at Daniel and think how pefect he is for me, and how it must indeed have been fate that brought him to me.  But having seen all these nameless children and the ones adopted at the same time as Daniel, I have come to the conclusion that it exceptional that a child doesn’t have something special, unique and wonderful, something worth cherishing and that it is up to us all as parents to find it and nurture it.

After meeting Daniel, my friend Sarah said – “Y’know we’ve all been saying how lucky Daniel is to have you adopting him, but now that I’ve met him, I think you may be the lucky one after all”.

Indeed I am Sarah, indeed I am. 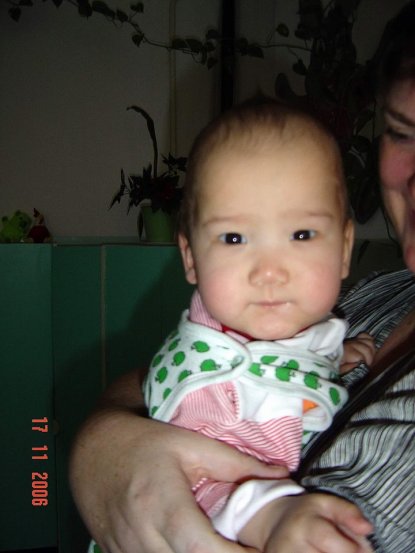