I moved house about three months ago.  I packed up a large semi-detached house, a small boy, a distressed cat into a removal van and decanted them into a smaller, two-bedroom house about a mile away.  There is a railway line running across the bottom of the garden and the house and garden are quite a bit smaller and the move was necessitated by a distinct lack of ready cash to pay my previously large mortgage.  Despite all of that, it has become obvious that we are very happy here.  Which is lucky really because there are many things about moving which knock a substantial amount of years off your life expectancy so it’s nice that it was ultimately successful.  Some of them big (like the costs to move one mile!), some of them small (the volume of mail I get for the previous owners who haven’t forwarded their 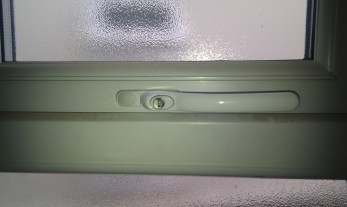 mail).  I continually, it seems, find things that are odd or different or need to be done – surely eventually it will end and the house will be really mine rather than living in some strange twilight world not quite belonging to the new owners whilst the ghosts of the old owners grip onto the letter box with whitened knuckles. Today it was the discovery that the hall window handle still has the plastic wrapped around it with the mint key neatly encased in it.  The window isn’t very new, nor very high not even particularly out of sight (though to be fair I have walked past it for three months before noticing) and it made me wonder if the plastic shroud was deliberate.  A window version of the plastic on sofas and car seats that some people leave on to keep it clean for longer.  But the handle has now been liberated. I’m opening a book on how long it takes the lovely white shiny handle to reach the same tone of sticky finger grey that the others are already.

← Then and Now
Single With Kids Campfest →